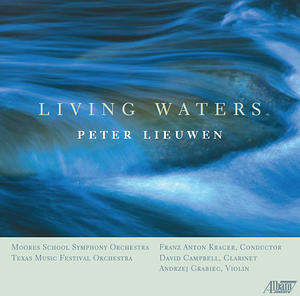 The opening orchestral flourish of Peter Lieuwen’s Living Waters is quite evocative of the beginning of Respighi’s Pines of Rome, with its light-infused, treble-rich trills. The piece quickly immerses the listener in the colorful sound world of the composer. Born in Holland, Lieuwen grew up in New Mexico, studying at the university there, and also at the University of California, Santa Barabara, where he worked with such noteworthy composers as Peter Racine Fricker, William Wood, Edward Applebaum, Emma Lou Diemer and Scott Wilkinson. Lieuwen’s music has had wide exposure through performances by the Royal Philharmonic Orchestra, Saint Louis SO, Pacific SO and many other ensembles. Since 1988, he has served on the faculty of Texas A&M University, most recently as Professor of Music and Composer-in-Residence.

Cast in a single continuous movement, Living Waters comprises several alternating slow and fast sections, the latter building up considerable palpable excitement. Along the way there is some technically-demanding passage work, superbly executed by the Moores School SO (the students are apparently augmented by some professional players). Special kudos must be extended to the unnamed trumpeter in this ensemble, whose demanding solo is flawlessly and brilliantly rendered. The work is imbued with various compositional techniques, including Klangfarbenmelodie, rhythmic overlays, and bi-tonality. While there are hints of minimalism in this work, it is of the John Adams variety—driving and pulsing—and never obnoxious and unrelenting (I never will attempt to disguise my considerable dislike of minimalism generally). Admirers of Adams’s work will find much to like in this piece as well, although Lieuwen is no mere Adams clone. I liked the piece so much that (rare for me) I immediately listened to it a second time before continuing my traversal of the CD.

Anachronisms, commissioned by the York Contemporary Ensemble, was awarded the first prize in the CRS National Competition in 1987. Scored for the rather unusual combination of clarinet, bass clarinet, cello and piano, I was expecting (because of the title) something in an old-fashioned musical style. But no, Lieuwen sounds every bit as up-to-date in this work as he does in Living Waters. According to the notes, the piece presents a stream of musical events which suggest those of both older and newer eras. Even though the piece is tonal (as are all of the works on this disc), I don’t really hear anything particularly reminiscent of any bygone musical era. OK, there are hints of a few older composers (Messiaen, Louis Andriessen, early Ligeti), but I’m not sure that this is what is meant by the title. The structure of the work seems formally diffuse, but everything hangs together well, partly due to a lively rhythmic motive that permeates the second movement. The performers give a crisp and compelling performance of the work.

From the very beginning with its ethereal sonorities, Lieuwen’s violin concerto captured my interest and admiration. Subtitled “Seren,” the work was commissioned by the violinist who presents it here, the subtitle being the Welsh word for star. With the entrance of the solo violin line, the tempo and rhythmic vigor picks up considerably, and the first movement continues with abandon throughout its course. The composer states
that he intended these musical gestures to represent motion across a Western landscape. That’s as good a description as any, but is not what I would necessarily have written to describe it before I read the notes. The second movement of this ingratiating work is a gently-lilting movement in 12/8 meter. Long supple lines in the violin are underpinned by a walking line in the harp and other instruments. It’s all really gorgeous as it allows the violin to do what it does best—to sing. The movement builds up to quite a dramatic climax at midpoint, followed by a section with greater rhythmic activity in both the solo part and accompaniment. The last movement recapitulates the vigor of the opening movement, albeit with rhythms of a more disjointed sort. A rather novel feature is the improvised cadenza preceding the coda. Violinist Andrzej Grabiec presents the entire work with the sure hand of one who is a master in respect to every parameter of the art of violin playing. His improvised cadenza perfectly suits the style and flair of the concerto. It should be transcribed and published with the work.

I hope all those who read my review of Michael Colina’s superb violin concerto a few issues back rushed out and bought a copy of that CD. If you did, Lieuwen’s work is another concerto that will reward you in similar ways that Colina’s did. It is, simply put, a major addition to the repertory for this instrument.

No less praise may be showered upon the disc’s concluding work, River of Crystal Light, scored for solo clarinet, harp, piano and strings. A steady asymmetrical flow of eighth notes drives the opening section, which may be described as joyous and exuberant. The effect of the piano and harp overlaying punctuated chords (each instrument taking some of the notes) is stunning, as is the virtuosic solo clarinet part, brilliantly played by David Campbell. Harmonic movement often progresses by the relationship of the third in a most pleasing fashion. The title of the work is drawn from Eugene Field’s famous nursery rhyme which begins, “Winken, Blinken and Nod one night sailed off in a wooden shoe; Sailed on a river of crystal light into a sea of dew.” Given that it’s been quite a few decades since I’ve heard that, I hope I might be forgiven for having not immediately recognized the source of the title.

Every aspect of this CD is highly commendable. I cannot forego mentioning the superb sonics on this CD, which rise to the audiophile level. My hat is off to engineer, Brad Sayles, and this release will be a strong contender for my next Want List. Don’t delay in getting your copy, given that the Mayans have the world ending a few months after this issue is published.