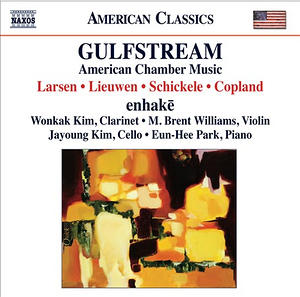 "Peter Lieuwen is much less known to me than the other composers represented here. Born in the Netherlands but raised in New Mexico, Lieuwen’s style is truly eclectic and draws upon everything from minimalism to impressionism to – even – touches of Messiaen. Gulfstream is titled in representation of the flow and effects of the warm, coastal currents that annually traverse their path from the Gulf of Mexico to northwestern Europe. Written in 2007 to honor the anniversary of Messiaen’s great work, this is a wonderful single movement piece that flows, much as the waters it depicts, through tonalities and moods. The pulse is frequently carried by the piano and the overall effect is actually quite soothing."