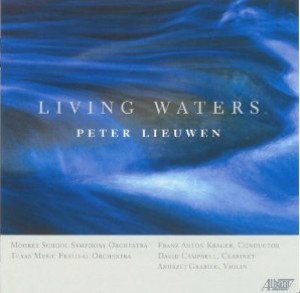 Commissioned for the Royal Philharmonic Orchestra by the Opera and Performing Arts Society at Texas A&M University.

LIVING WATERS was premiered by the Royal Philharmonic Orchestra conducted by Danielle Gatti, on October 25, 1997 at Texas A&M University. The work, composed in a single continuous movement with alternating slow and fast sections, is intended to convey a general impression of natural sounds in terms of mood and color.

Such allusions as there are to wind, rain, flowing streams, rushing rivers, light dancing over ocean waves and various other natural phenomena are represented musically through various means including the simultaneous presentation of different rhythmic patterns, the juxtaposition of chromatic patterns with those that are primarily diatonic, extensions of triadic principle and klangfarbenmelodie (sound-color- melody) in which a musical gesture is initiated in one instrument, or group, and completed in another. Two tonal centers are occasionally implied.

Also present in this work are orchestral colors similar to those we find in the early scores of Debussy and Stravinsky; such as La Mer and The Rite of Spring. The special sonorities present in these works is often the result of the composer’s avoidance of instrumental doublings at the unison or octave and the use of extreme registers. Rhythmic influence is drawn from the vibrant, pulsating rhythms of contemporary American and World musics including jazz, rock and Afro-Cuban. Contrary to their traditional supporting role in classical music, percussion instruments in Living Waters are often balanced with the winds, brass and strings in terms of their role in the musical gestures.