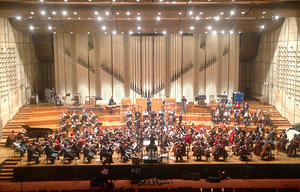 Vivace began its musical life as the third movement of my Sonata for Guitar (2009), recorded by Isaac Bustos on MSR CD 1581. While writing the sonata, I began to realize what a resonant “symphonic” instrument the guitar really is, and how well idiomatic guitar figurations might translate to the orchestra. As the title suggests, Vivace is a short lively piece tinged with spiritual uplift. Supported by a steady rhythmic ostinato in stretto, the broad melody (in slow harmonic rhythm) is presented first in the highest voice and then answered in a lower one. The dove-tailing of gestures and its consequent antiphonal character permeate the movement. Often the melody is presented “in harmony” at the interval of the 7th or 9th. As with many of my recent compositions, the variation, color and drama are enhanced by the juxtaposition of pan-diatonic passages with those that are chromatic and dissonant.